Agriculture is the main source of income for 72% of Pakistan’s population. The development of irrigation in Pakistan started in the latter part of the 19th century on a scientific basis with major goals to reduce the risk of starvation and sustain political and social stability.

Sophisticated and high-efficiency irrigation methods of water application are used in larger irrigation systems. There are two basic methods:

Artificial rainfall is provided by irrigation by the sprinkler. A pipe system in which the liquid is under pressure guides the water to the ground. The spraying is accomplished using multiple spinning sprinkler heads or spray nozzles or a single gun type sprinkler. Sprinkler System is subdivided into Centre Pivot, Rain Gun and Lateral Move System.

Through drip irrigation, also referred to as trickle irrigation, a pipe system leads the water to the ground. A pipe is mounted on the field next to the line of plants or trees. A hole is created in the tubing and fitted with an emitter at regular intervals between the plants or branches. The water is distributed through these emitters gradually, drop by drop, to the crops.

Increasing salinity and waterlogging, low efficacy in delivering and use, overexploitation of fresh groundwater, unbalanced distribution, fickle delivery, and inadequate cost recovery are some of the major problems faced by farmers.

Farm Dynamic Pakistan comprehends the catastrophic problems faced by agriculturalists and farmers. That’s why FDP deals with imported and high-efficiency irrigation systems. Such as:

Feel free to contact us regarding product discussions and services related to irrigation systems and other field mechanization technology. 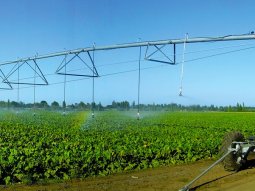